One Piece at Time

South Tower of the Tyne Bridge, Newcastle upon Tyne, 1987 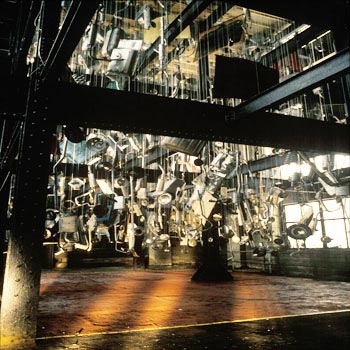 Twelve hundred second-hand car parts were suspended by wires from a platform mounted in the South Tower of the Tyne Bridge.

Over a period of five weeks a motorised cutting device cut approximately 40 wires a day, causing the car components to fall to the floor.

The sound of the falling metal was recorded, and layered on top of the previous recording. At the end of the exhibition all the car parts had fallen to the ground, leaving only the accumulated soundtrack.